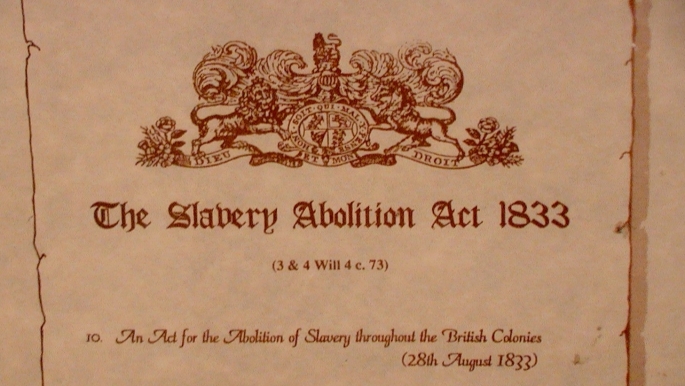 As part of our partnership with the City Voices programme of the Gloucester History Festival, undergraduate students in History at the University of Gloucestershire are undertaking a number of local history projects for 2022. The third project examines the legacies of slave ownership in Cheltenham, extending the work conducted by students in 2021. The project group is made up by students Steve Hannis, Ben Haidon, Sam Burgess, Tom Gullick and Harvey Pearce.

In 1833 the Abolition of Slavery Act was passed in parliament, starting the slow process of the emancipation of all slaves in the British Empire. As a result of abolition, the government agreed to pay compensation to slave owners for the ‘loss of their property.’ Any slave owner who wanted to claim compensation had to apply. This process created detailed records of slave ownership in Britain. These records are the starting point of our project, which aims to examine some of the issues relating to the abolition of slavery and compensation paid to people residing in Cheltenham.

We began our project in January and began using the Legacies of British Slave Ownership database. We started by looking at various individuals living in Cheltenham who claimed substantial amounts of money under the Compensation Act. Many of these individuals left little trace of how they spent the money, bringing us to the conclusion that most of them simply lived off it. We researched various people, but many were dead ends. Then we discovered William Hinds Prescod, who moved to Cheltenham after Emancipation. The records showed that prior to abolition, Prescod was the largest slave owner in Barbados after inheriting a number of plantations from his uncle in 1815. He claimed £37,000 in compensation following the abolition of slavery, over £4,000,000 in today’s currency.

Our research so far has demonstrated the complex nature of this subject, with Prescod being a particularly complicated figure. A Cambridge educated Lawyer, Prescod freed over twenty slaves during his time in Barbados and fathered 4 children with a freed slave. One of these children was Samuel Jackman Prescod (fig 1), who became the first black politician in Barbados. Prescod also fiercely contested other claims made against his uncle’s will, claiming that his relatives intended to put their hands into his pocket. After this online research we visited Gloucestershire Archives where we managed to find proof that Prescod bought his Cheltenham estate, Alstone Lawn, for £1,200 just after he received his compensation. We found the original record for this transaction, on the document was Prescod’s signature still intact. Some further research online found that his estate eventually fell into disrepair and was burnt down by suffragettes in 1913.

Prescod’s wealth was demonstrated by the fact that he also amassed a substantial art collection that was auctioned off by his family in 1861, 13 years after his death in 1848. A record of the auction of Prescod’s collection is held at the National Gallery. After looking through these records we found that a significant proportion of his collection was acquired on a series of trips to Italy, which means he took part in the ‘Grand Tour’ custom of his era. His collection was made up of sculptures, vases sketches and paintings, with the most notable artists being Rembrandt, Vandyke and Guido (fig 2). Our research has also revealed evidence that Prescod invested in shares in the Assembly Rooms in Cheltenham. The Assembly Rooms was a hub for the elite in Cheltenham due to its versatile nature. It was the site of art trading, theatrical productions, and political activities (which had also included debates on the abolition of slavery). The site of the Assembly Rooms is now the Everyman Theatre, giving us a potential link between Prescod’s wealth and the present day.

What we have found so far is interesting, but there is a lot more to learn about Prescod. We are going to conduct further research into his investments in the local area, as well as his activity in Barbados before abolition, with the hope that we find out more about the legacies of slavery and how these may have impacted the town. We have recently found Prescod’s will, which may provide some further information. All the information we have found so far has given as a lot of leads, we are hopeful that once we have followed all of these up, we will have a clearer picture of Prescod’s story.